Technology in the dairy sector is playing a huge role in producing high yields and with quality products makes the farmer as well as the economy happy and healthier. The production of milk or monitoring the herds by embracing the digital trends dairy farmers is making a great business throughout the world.

However, in India, it is expected that digitalization will cover the complex regions of dairy farming to offer seamless profits by overcoming the dairy business difficulties and framework. The dairy farming industry has grown massively in the last few decades witnessing the livestock population in the world.

With emerging demand, it has been hooked that milk is being adulterated for economic gain. Due to inadequate storage facilities and lack of hygienic focus, this situation is worse in major countries, particularly when milk is produced locally and sold directly to individuals. Reports have shown that, occasionally, 100% of liquid milk has been diluted in some way.

A Cocktail of chemicals

Being made up of 87% water, milk is prone to adulteration by unscrupulous middlemen and unfaithful farm workers with chemicals such as hydrogen peroxide and formalin. Naturally, its high nutritive value makes an ideal medium for the rapid multiplication of bacteria, particularly under unhygienic production and storage at ambient temperatures.

A national research statistics have revealed that almost 70% of the milk sold and consumed in India is adulterated by contaminants such as detergent and skim milk powder, but impure water is the highest contaminant.

And why it has been done?

When you hand milk a cow, there will be bits of hay, hair and sometimes even flecks of manure that land in your milk bucket. Skimping on cleaning steps is the one you should mess with. Bacteria particles can get engaged in the tubes and contaminate the fresh milk, potentially making the consuming one to get sick.

Dairy equipment and milking machinery can manage herds faster while ensuring the quality of the milk, which allows dairy owners to harvest from more cattle than they could with traditional means.

And, Modern Dairy Machines serves you with the best possible solutions engaging with advanced dairy machinery and equipment. When using a milk machine, the storage bucket will be enclosed and sealed. There are no chances of contamination getting laced during the milking process. This helps the natural milk remains fresh and clean.

As new technologies continue to change how dairy producers manage and operate their farms, it is good to keep an eye on the horizon to see what might be available in the next five to 10 years. Everyone’s attention on the dairy industry was seeking... 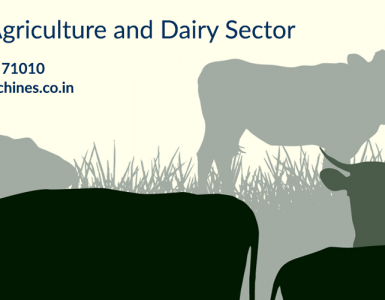 Agriculture is the oldest human sector, but it’s obviously no stranger to technological change. The industrial revolutions of current centuries replaced handheld tools and cow-drawn ploughs with gasoline engines and chemical fertilizers. Ramping up...